Let’s talk about L dwarfs.  The L spectral type contains object with temperatures in the range of about 1400-2200 Kelvin.  It was first established in 1999 by Kirkpatrick et al.. They chose the letter “L” because it is next to “M” in the alphabet; M was the coolest spectral type in the literature at the time, and “N” was already taken to describe a class of evolved stars.  Amazingly, L dwarfs are about twice as common as main sequence stars. They are just harder to spot because they are so much more faint and red.

The first L dwarf discovered was GD 165B, found by Becklin & Zuckerman in 1988.  Curiously, 165B orbits another special kind of astronomical object: a white dwarf.  Nowadays, about 1300 L dwarfs are known.  So discovering one new one doesn’t usually merit a paper on its own.  But when we collect a batch of 50 or so we will definitely want to announce them with a publication, especially if one or more turn out to be in moving groups of young stars.   For example, here’s a recent paper by our own Adam Schneider announcing the discovery of 47 new L dwarfs, including seven that are in young moving groups.  Membership in a moving group is important because it establishes the objects age.

A good clue that you might have an L dwarf is if it doesn’t appear in the DSS images, only in 2MASS and WISE.   That’s because the DSS images were taken in visible wavelengths, and L dwarfs are too cool to shine in visible light, so they only show up in 2MASS and WISE bands, which are infrared.   (T and Y dwarfs may not even show up in the 2MASS images). Just remember, the rule of thumb is that if it’s not in SIMBAD, we want to see it on the Think-You-ve-Got-One form.  There are still interesting objects to find that are in DSS images.

Here’s one of the ones you found.  It’s a great test for the eyes!

It’s a faint bluish dipole. Can you spot it in this flipbook?  If not, scroll down to the answer key at the end of this article.

Here’s another one.  Remember, each one of these is a real new discovery–not a recovery of an object that was known before!

Can you see it there?  Here’s a third on to challenge yourself with.

Ignore that giant blinking blue ghost in the middle!  They are tough to spot.  If you need help, here are the answers, below.  Congratulations to @Andy_Arg,  @karmeliet,  @graham_d,  @stevnbak, and @NibiruX for their exceptional eyesight And keep up the good work, everybody!! 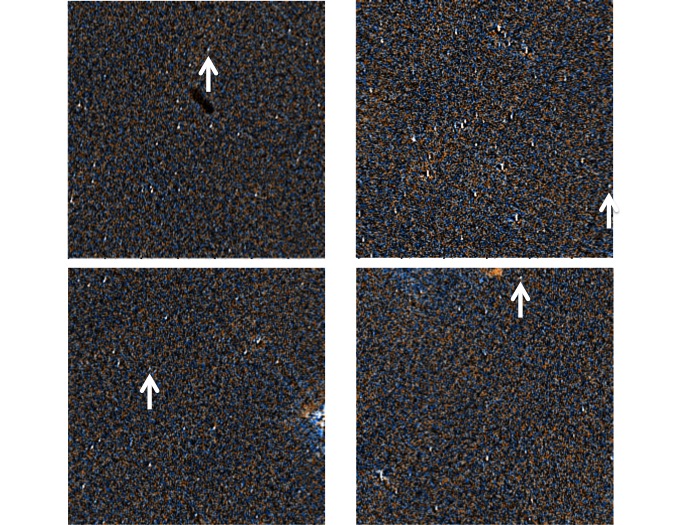