Today is a big day at Backyard Worlds: Planet 9!  We’re celebrating our 2nd anniversary, our reboot, and announcing our second paper, published in the Astrophysical Journal letters.   (You can read it here for free.) It’s about a unique white dwarf that’s an analog for the solar system three billion years from now; the oldest white dwarf known to host a dusty disk, the likely remains of a planetary system.   Check out this guest blog post by our own Melina Thévenot, who explains how she discovered this record-breaking object, which provides such a chilling glimpse into the future.

Hi everyone. I am Melina Thévenot, a volunteer of the Backyard Worlds: Planet 9 project from Germany. Here I want to tell you a bit about how I discovered an unusual white dwarf and how the researchers uncovered that it is not only unusual, but also cool.

As a volunteer of the Backyard Worlds: planet 9 project, I spent a lot of time searching for brown dwarfs. The Gaia Data release 2 was my favorite survey for the search of brown dwarfs. I uncovered probably several hundred new brown dwarf candidates that move in wiseview with the help of three other volunteers: Katharina Doll, Hugo Durantini Luca and Peter Jalowiczor.

While improving my search I noticed something about brown dwarfs in the Gaia catalog: some good sources don’t have color information in Gaia DR2. This is a problem, because I relied on a color-cut. To check if I missed any good T-dwarf, I decided to use Allwise to find sources with high infrared excess and the high parallax measurement in Gaia DR2. In the resulting list I could find fake sources that did not move in wiseview, T-dwarfs (distance 5 to 10 parsec) and one source that does not belong in this list. 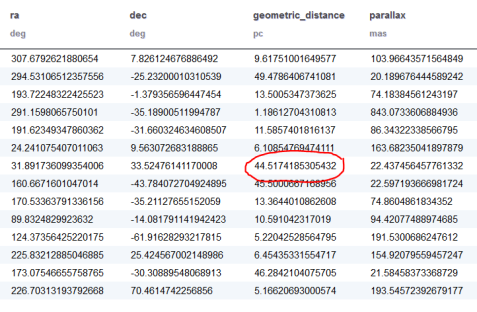 The object in the red circle has a distance of 44 parsec. Gaia should not detect a T-dwarf at this distance.

Is it another fake source? I could have ignored it. I am glad I checked the movement.

As you can see: Compared to the background objects it is moving and in PanSTARRS you can see a blue source.

This source is LSPM J0207+3331. At this time I still had no clue what it could be. I did need some days to think about it. After checking the position in a HR-diagram I knew that it was a white dwarf with large infrared excess (Allwise w1-w2≃1). I guessed that this excess comes from a circumstellar disk. Time to loop in some other volunteers, who are advanced users of Disk Detective. Katharina Doll told me that the source looks good and she confirmed that it was possible for a white dwarf to have a disk, something I did not know until she told me. We decided to contact Marc Kuchner and soon John Debes joined the discussion.

John Debes told us this white dwarf is cold, in fact it was 1000 Kelvin cooler than any known white dwarf with an infrared excess. So the researchers decided to observe it with APO. But the dome was closed because of bad weather. Soon the white dwarf was observed with Keck! The telescope with the largest mirror on this planet!

I watched closely how things developed. I made a timeline:

Let’s talk about the paper. Des Pudels Kern. (German Saying, “The core of the poodle” meaning the main point)

What is a white dwarf? Our sun will develop into a red giant billion of years in the future. The red giant will lose the outer layers in a Planetary Nebula. The core that is left is a hot white dwarf and it will gradually cool and become fainter.

The process is very violent and “loosing the outer layers” is nothing else than burning the orbiting planets in strong solar winds. But not everything will perish. White dwarfs have a leftover stellar system with asteroids, comets and planets. If an asteroid or comet comes too close to the white dwarf, it can be torn apart by the tidal forces caused by the gravity of the white dwarf and the material settles down in a disk around the white dwarf. 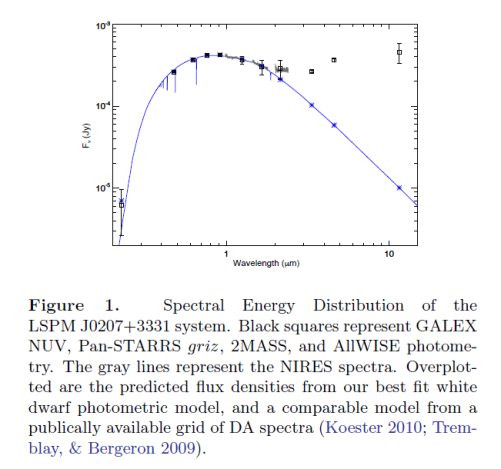 In figure 1 of the paper you can see a blue line. This is how the Spectral Energy Distribution (SED) of the white dwarf should look like without a disk. The gray lines are the spectra from Keck NIRES and the black squares are the photometry from different surveys. You can see how the spectra and the photometry are somehow taking off to the right side. This blog post from Disk Detective explains what a SED is and how a SED looks like for star+disk. It might help you interpret this figure.

But this is not where the story of this white dwarf ends. The disk around LSPM J0207+3331 is not a simple disk, but it consists of two components: an outer colder ring with a temperature of 480 Kelvin and an inner ring with a temperature between 550-1400 Kelvin. The white dwarf has an temperature of 6120 Kelvin and a mass of 0.69 solar masses. The outer ring might have formed from a small asteroid that was disrupted by the tidal forces in the recent history of the system. This is the first time such a system was observed.

In the future, researchers will observe this white dwarf again and obtain more data, which might tell more about this system. An optical spectrum, for example, might tell us if any material from the disk is falling into the atmosphere of the white dwarf, and what that material is made of.

I am very proud to be part of this discovery and hope you enjoyed reading this blog post.